A Night Out On Earth Tour 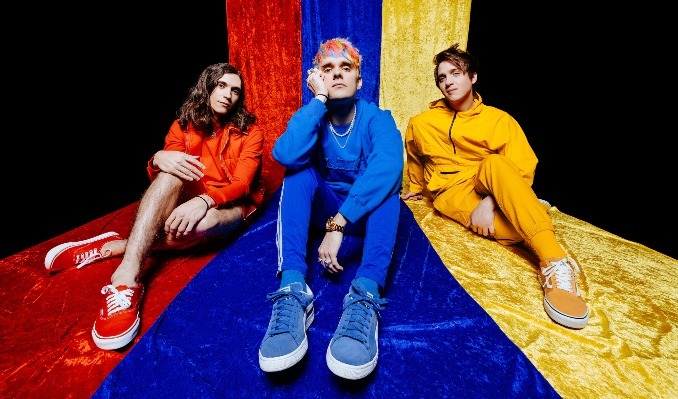 As they wrote and recorded their second full-length album Entertainment [Equal Vision Records] out January 26, 2018, a wise prophet’s words stuck with Waterparks… “Tina-motherfucking-Fey once said, “Everything that’s good comes from honesty’,” repeats lead singer and guitarist Awsten Knight. “When you’re being that open, others connect. We’re not vague and subtle in our songs. I want everything to feel colorful and real. This band embodies that idea.” Since their emergence in 2015, the Houston trio—Awsten, Otto Wood [drums], and Geoff Wigington [guitar, backing vocals]—have kept it real and catapulted to international renown as a result of a signature style that seamlessly slips-n-slides between rock, pop, and alternative. Their full-length debut, Double Dare, earned a rare 4.5-out-of-5 star rating from Alternative Press and spawned the hit “Stupid For You,” which generated over 4.6 million Spotify streams and counting. On the road, they tore up venues everywhere alongside All Time Low, Good Charlotte, Sleeping With Sirens, State Champs and more in addition to selling out their first UK jaunt and 14-out-of23 dates on a US co-headliner. Among various accolades, Awsten graced the cover of Alternative Press for the Warped Tour issue, and the entire band covered Rock Sound. Not only did they play the Alternative Press Music Awards, but they took home the award for “Breakthrough Artist” and garnered “Best International Newcomer” from Rock Sound. In the middle of this whirlwind, they hunkered down and created Entertainment. For the first time, they switched up the writing process and traded H-Town for Los Angeles. Awsten holed up in a North Hollywood Airbnb, but he wasn’t alone… “The place was totally fucking haunted,” he recalls. “There would be random door closings. One night, I literally heard a couple of female voices whispering in my ear, ‘It’s okay. Come with us.’ It felt super demonic. Then, it was all quiet when I got up. I was like, ‘Fuck this.’ I stole some Holy Water and sage from a catholic church, but I said a prayer and apologized since I needed it. It was definitely a different creative process.” Having exorcised the living quarters, the bandmates hit MDDN Studios with producers Benji Madden [Good Charlotte, 5 Seconds of Summer] and Courtney Ballard [5 Seconds of Summer, All Time Low] behind the board, reuniting the Double Dare team. “It was nice to get out of that haunted ass Airbnb,” laughs Awsten. “It worked so well the first time with Benji and Courtney, so it made sense to do it again. It’s such an easy process with them. They trust our songwriting.” The boys introduce Entertainment with the upbeat, up-tempo, and undeniable anthem “Blonde.” Palm-muted guitar kicks off the verse before building into a stadium-size refrain, “I think the blondes are done with fun. At least it’s all about you.” “It’s the closest thing to Double Dare,” he explains. “I wanted to come out with a fucking smasher that’s fast. It captures all of the elements fans liked from Double Dare and puts them into one song. As far as the lyrics go, they discuss the stresses and pressures I’ve felt from touring. I try to disregard them as much as I can as they wear on you. This is the first release where anybody is paying attention and watching. I quit looking at comments online, because I don’t want to see good or bad mentions. That many opinions one way or the other never helps.” Elsewhere, “Not Warriors” builds from eighties-style synth swells into a hypnotic and hardhitting refrain. “Again, it was written around a time of heavy touring,” he goes on. “My girlfriend is an actress, so she’s often gone as well. It’s about having a small amount of time together and wanting more. It’s bittersweet. I get to do what I want, but I miss her.” “Crybaby” embraces more sampling and programming, illuminating the group’s growth. Meanwhile, “TANTRUM” (purposefully in all caps “because it’s loud”) stands out as a full-on rocker that “borders on hardcore.” At the same time, there’s the ebullient “Lucky People,” which Awsten calls “The most Michael Bublé, Jazon Mraz-ass song ever! If I was a ukulele guy, that would’ve been a ukulele song…” They’re not ukulele guys though. They’re just Waterparks, and that’s more than enough at the end of the day. “I want fans to hear Entertainment and know we’re just being real,” he leaves off. “We don’t want to be pigeonholed. We can make rock, we can make heavier music, and we can sound pop. It’s who we are. Ultimately, it all comes down to the hooks and songs. These are the biggest and best we can write. I know every band says that, but fuck it. I’m being honest.
Read More

FacebookTwitter
*Service and handling fees are added to the price of each ticket.
Buy Tickets