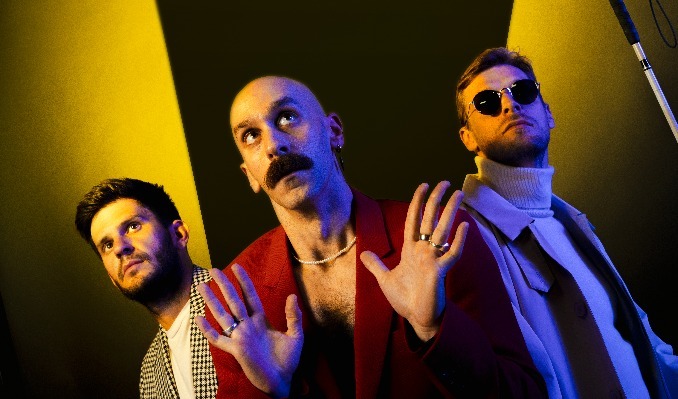 KIDinaKORNER/Interscope band X Ambassadors' debut album, "VHS," reflected on the events that shaped the lives of lead vocalist and lyricist Sam Harris and his older brother, keyboardist Casey Harris, growing up in Ithaca, New York. The gold-certified album, which Rolling Stone called "bombastic rock that's as stomping as it is diaristic, leavened by big-tent pop hooks and a hint of hip-hop swagger," debuted at No. 7 on Billboard's Top 200 chart and spawned the platinum-selling "Renegades," which spent 12 consecutive weeks at No. 1 on the Alternative chart, and the double-platinum "Unsteady." The success of "VHS" sent X Ambassadors on a nearly two-year touring odyssey that found them winning over fans around the world and performing at the Lollapalooza, Bonnaroo, Life Is Beautiful and Shaky Knees festivals, among others, and establishing themselves as a world-class rock band. X Ambassadors released the impassioned "Ahead of Myself" last fall followed by "Joyful" and "Don't Stay" in early 2018 before embarking on their JOYFUL headline tour. The band returned to Ithaca for the second annual Cayuga Sound Festival this past September. X Ambassadors is currently working on their sophomore album. For more information visit www.xambassadors.com

YouTubeMore InfoFacebookOfficial WebsiteTwitter
*Service and handling fees are added to the price of each ticket.
Buy Tickets