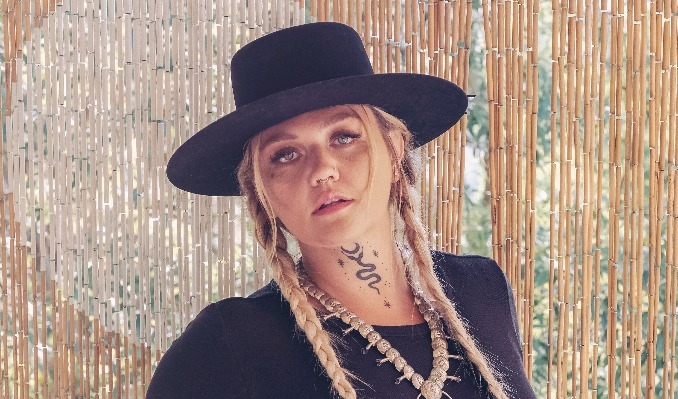 Multi-platinum, award-winning recording artist Elle King has enjoyed over 1.5 billion streams worldwide.  Her most recent single release has her reuniting with Miranda Lambert on the infectious collaboration “Drunk (And I Don’t Wanna Go Home)”  which debuted at #1 on Billboard’s Rock and Country Digital Song Sales Charts. Co-written by Elle King with Martin Johnson, who also produced the track, “Drunk” was recorded in Nashville and New York pre-pandemic. This is the second time the two female platinum-selling powerhouse performers have recorded together with their first release “Fooled Around and Fell in Love” (along with Maren Morris, Ashley McBryde, Tenille Townes and Caylee Hammack) going on to win the 2020 ACM Award for “Music Event of The Year.”  Elle also was a special guest on Miranda’s 2019 Roadside Bars & Pink Guitars tour. To accompany the track, King and Lambert met up in Nashville to film an 80s-inspired wedding video starring Elle as the bride and Miranda as her Maid of Honor complete with a cameo from Elle’s real-life fiancé as the groom. The video was shot in January by directing duo Running Bear using strict COVID protocols.
Elle’s latest EP Elle King: In Isolation  was released in summer of 2020 and is a collection of raw demos/songs she’s recorded acoustically while quarantining at home in Los Angeles.
Her debut album Love Stuff featured her breakthrough single “Ex’s & Oh’s,” which earned her two GRAMMY nominations and is certified 4x times platinum.  The breakthrough single hit No. 1 on Billboard’s Hot Rock Songs Chart, topped the AAA, Hot AC, and Alternative Radio charts, leading King to become the second female artist in 18 years to reach No. 1 at the latter format. Her 2016 collaboration with Dierks Bentley on “Different for Girls,” also scored a No. 1 on the Country Airplay charts and won the CMA Award for “Musical Event of the Year.”
Her single “Shame,” featured on her second studio album Shake The Spirit marked King’s fourth radio #1 single and marking Elle the only act in history to have scored No. 1 singles on the Adult Pop Songs, Adult Alternative Songs, Alternative Songs and Country Airplay charts. Rolling Stone wrote “Elle King is a little bit country, a little bit rock n’ roll, but ultimately, she’s punk as fuck.” Variety wrote “…King churned the clotted cream of punkish country, raw R&B, crotchety rock and deep blues into rich, buttery musical drama…(she) belted, crooned, purred, sauntered and swaggered her way through a tautly rocking set…one thing became very clear: nearly every song was equally contagious, catty-cool, and hit-worthy.”
Read More

Official WebsiteTwitterFacebookMore Info
*Service and handling fees are added to the price of each ticket.
Buy Tickets